MU provides all the benefits of two universities in one: It’s a major land-grant institution with a statewide mission of service to citizens and Missouri’s largest public research university. Considered one of the nation’s top-tier institutions, Mizzou is the flagship campus of the four-campus University of Missouri System. It is one of only 34 public universities, and the only public institution in Missouri, to be selected for membership in the Association of American Universities.

The state’s most comprehensive university, MU offers more than 300 degree programs through 19 colleges and schools and is one of only five universities nationwide with law, medicine, veterinary medicine and a nuclear research reactor on one campus.

Mizzou has a diverse enrollment with 35,000 students from every county in Missouri, every state in the nation and 120 countries. The favorite classroom for the best and brightest, Mizzou attracts more valedictorians, Curators Scholars and Bright Flight Scholars than any other college or university in Missouri. Twenty-six percent of MU freshmen come from the top 10 percent of their high school classes.

Truman: The Spirit of Mizzou

Truman: The Spirit of Mizzou

The Missouri Tigers are named in honor of a Missouri Union militia unit that guarded the area of Columbia, and the university during the American Civil War. The true “Missouri Tigers” were a Union “Home Guard” militia unit made up local men from the area around Columbia. Their duties were to protect the University of Missouri and the area from approaching Confederate forces, pro-Confederate guerillas, desperadoes and others that may have threatened the area.

In the 1890s, the University of Missouri’s first football team was organized and the athletic committee adopted the nickname “Tigers” to officially honor and recognize the fighting spirit of those Civil War Union home guards that protected the university and the areas surrounding Columbia, Missouri. Their spirit is now embodied in the Mizzou mascot – “Truman the Tiger”. Named for the Missouri-bred President of the United States – Harry S. Truman.

Our distinct mission, as Missouri’s only state-supported member of the Association of American Universities, is to provide all Missourians the benefits of a world-class research university. We are stewards and builders of a priceless state resource, a unique physical infrastructure and scholarly environment in which our tightly interlocked missions of teaching, research, service and economic development work together on behalf of all citizens. Students work side by side with some of the world’s best faculty to advance the arts and humanities, the sciences and the professions. Scholarship and teaching are daily driven by a commitment to public service — the obligation to produce and disseminate knowledge that will improve the quality of life in the state, the nation and the world.

The University of Missouri, as the state’s major land-grant university, honors the public trust placed in it and accepts the associated accountability to the people of Missouri for its stewardship of that trust. Our duty is to acquire, create, transmit and preserve knowledge and to promote understanding.

We the students, faculty and staff of MU hold the following values to be the foundation of our identity as a community. We pledge ourselves to act, in the totality of our life together, in accord with these values.

Respect for one’s self and for others is the foundation of honor and the basis of integrity. A hallmark of our community is respect — for the process by which we seek truths and for those who engage in that process. Such respect is essential for nurturing the free and open discourse, exploration and creative expression that characterize a university. Respect results in dedication to individual as well as collective expressions of truth and honesty. Respect is demonstrated by a commitment to act ethically, to welcome difference, and to engage in open exchange about both ideas and decisions.

A sense of responsibility requires careful reflection on one’s moral obligations. Being responsible imposes the duty on us and our university to make decisions by acknowledging the context and considering consequences, both intended and unintended, of any course of action. Being responsible requires us to be thoughtful stewards of resources — accountable to ourselves, each other and the publics we serve.

Learning requires trust in the process of discovery. Discovery often fractures existing world views and requires acceptance of uncertainty and ambiguity. Therefore, the university must support all its members in this lifelong process that is both challenging and rewarding. As we seek greater understanding and wisdom, we also recognize that knowledge itself has boundaries. What we know is not all that is.

We aspire to an excellence that is approached through diligent effort, both individual and collective. Pursuing excellence means being satisfied with no less than the highest goals we can envision. Pursuing excellence involves being informed by regional, national and global standards, as well as our personal expectations. We recognize and accept the sacrifices, risks and responsibilities involved in pursuing excellence, and so we celebrate each other’s successes. We commit ourselves to this process in an ethical and moral manner.

These statements are mere words until we integrate them as values in our individual lives and reflect them in our institutional policies and practices. We pledge ourselves to make them effective in the very fabric of our lives, our community, and all our relationships with others, thereby enhancing the development of individuals and the well-being of society.

MizzouRec Services and Facilities is a department within the Division of Student Affairs that provides quality leisure experiences to all members of our campus community, primarily Mizzou students. MizzouRec aspires to be the best part of your Mizzou day and your first choice for fun. The result is a facility that Sports Illustrated On Campus dubbed as the “Best Rec Center in the Country”.

From their award winning facilities to their nationally recognized programs, MizzouRec strives to bring their members and guests an environment that inspires and promotes a healthy, active lifestyle. MizzouRec has proudly housed and supported the University’s of Missouri’s wheelchair basketball team since 2004. The Rec offers a vibrant, dynamic environment that provides our student athletes the resources and programs for both academic and athletic success.

Once the home of the Tiger Athletic Basketball team, these college-length courts now are home to our Mizzou Wheelchair Basketball team, as well being open and available for informal recreation basketball. All Mizzou wheelchair basketball home games are played on Court 10 of Historic Brewer Fieldhouse. 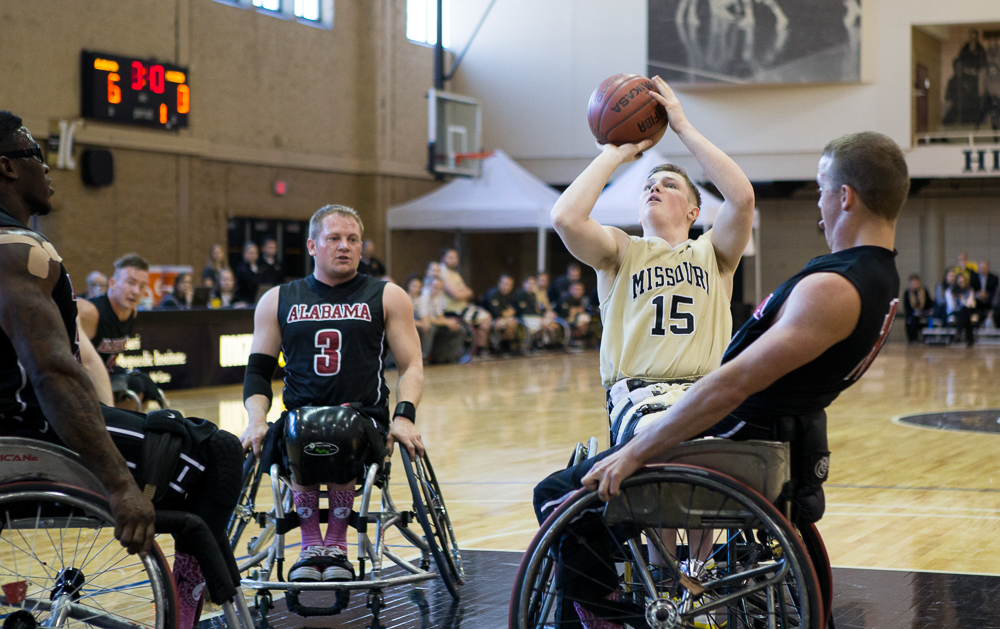 For faculty/staff at Mizzou.

Connect with the MWB Team: