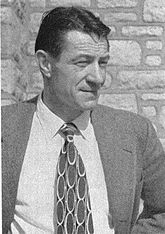 Wilbur “Sparky” Stalcup is a famed former Missouri men’s basketball coach who led the Tigers to 195 wins and two Big Seven Holiday Tournament championships in 16 seasons. He was president of the National Association of Basketball Coaches from 1961-62. After his coaching career, Stalcup served as Mizzou’s athletic director, and was named to the Missouri Sports Hall of Fame in 1979. Stalcup’s Garage is in honor of his competitive spirit and dedication to building a positive sporting environment.